After last week’s historic peace deal brokered between the United Arab Emirates and Israel, Sudan wants in. The Sudanese Foreign Ministry Spokesman reportedly told Sky News Arabia Tuesday that it could quite possibly make a similar deal in the near future and didn’t deny having talks with Israel.

“There is no reason for the continuation of hostility between Sudan and Israel,” the Sudan’s FM said. “We do not deny the existence of contacts between the two countries.”

Notably, Sudan was the location where Arab nation’s declared they wouldn’t normalize ties with Israel and had three ‘nos’: “No negotiations. No recognition. No peace.” Yoni Michanie first pointed to this on Twitter Tuesday. 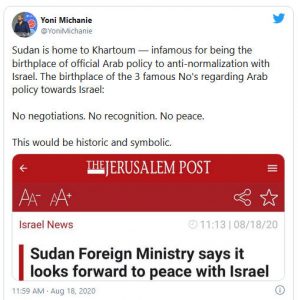 This is a milestone. Sudan (and the other Arab countries) have to make a choice–do they want to submit to Iran or make peace with Israel and remain as independent countries? The goal of Iran is to restore the caliphate (the former Ottoman Empire) with Iran as the head. This would involve bringing all the Arab countries in the region under the control of Iran. Not every Arab country wants to give up their sovereignty. The behind-the-scenes negotiations of the Trump administration have brought the possibility of peace to the Middle East.