The Federalist posted an article yesterday about some additions to The National Museum of African American History & Culture (NMAAHC) website that I would consider toxic. The NMAAHC is part of the Smithsonian museum group.

The article includes a screenshot of “Aspects and Assumptions of Whiteness.” 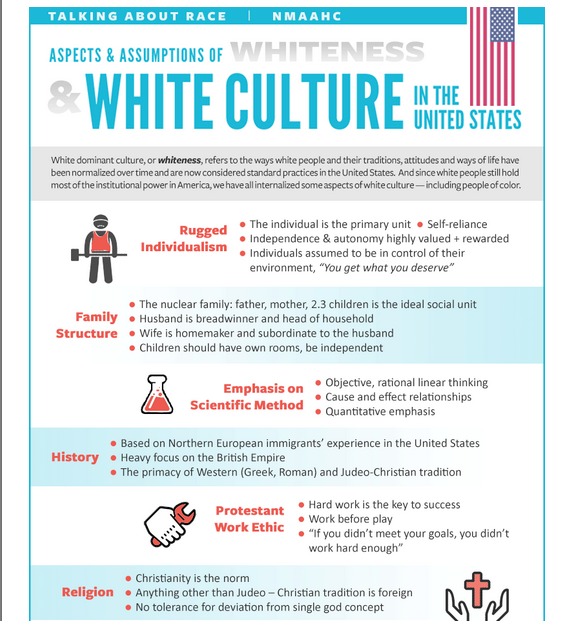 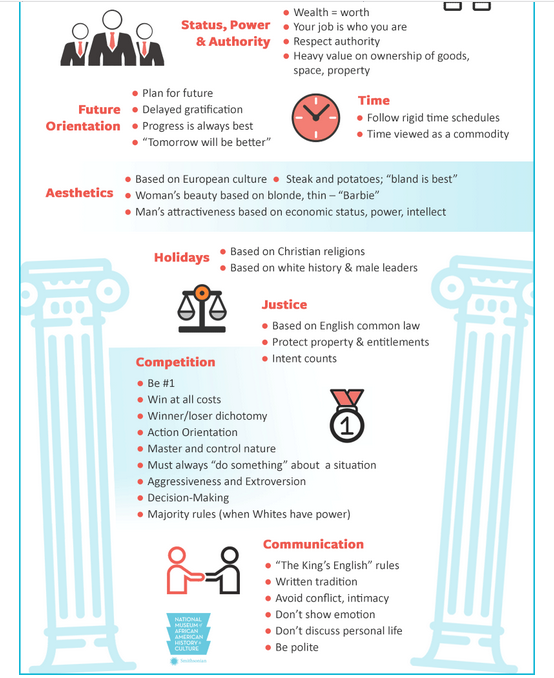 Some of the traits listed on this chart are negative traits. However, some of the traits listed on the chart are traits needed to become a contributing member of society and avoid poverty. For instance, a two-parent family is less likely to be poor than a nuclear family. Delayed gratification is often the key to success and stability–it can also be called self-discipline. That is not a racist concept. Being polite should not be considered a racist concept. Respecting authority is also a key to an ordered society–it is not a racist concept. The chart notes that our aesthetics are based on European culture. That is because up until Ted Kennedy changed the immigration laws in 1965, we were a country of European immigrants. In 1860, slaves made up 12.8 percent of America’s population (article here). In a time that did not have mass communication, they were not going to have a lot of influence on the culture regardless of their status.

What this chart does is undermine the foundations of a civilized society. The foundations of America are Judeo-Christian. They include such things as two-parent families, a work ethic, manners, respect for authority, and all the things that make living together possible. Without those things society would devolve into chaos. I am sorry that the Smithsonian considers those things ‘white.’ I consider them civilized. Categorizing these values as ‘white’ places an obstacle in front of people of color if they want to be successful. Calling those things that result in success ‘white’ discourages others from doing the things necessary to succeed.  If someone considers the foundations of our society ‘white’ and thus racist, I suggest they find a country whose foundations and expectations are more to their liking and emigrate there.