The Washington Examiner posted an article today that stated something that most of us know but haven’t seen widely reported in the media.

In Europe, you will often hear politically savvy people refer to Green Party politicians as “watermelons.” The reason is that although they might be environmentalist “green” on the outside, these leftists are secretly communist red if you look beneath the surface.

They typically resort to such subterfuge because environmentalism is more popular than Marxism. A former East German communist is bound to be unpopular, but perhaps not so much if he rehabilitates himself as a renewable energy enthusiast.

The case of Rep. Alexandria Ocasio-Cortez, a Democrat from New York, is different in that she openly advertised herself as a socialist in a country with a well-grounded historical aversion to such alien ideologies. But her grand policy initiative, the $93 trillion Green New Deal, was still billed as if it were a legitimate environmentalist idea. We were supposedly trying to save the world from imminent destruction. As Ocasio-Cortez herself put it, “We’re, like, the world is going to end in 12 years if we don’t address climate change.”

When Representative Ocasio-Cortez makes statements like that, this is what she reminds me of: 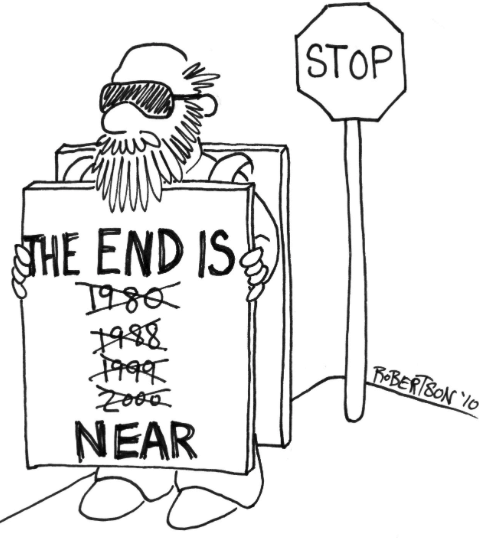 At any rate, her chief of staff, Saikat Chakrabarti, let the cat out of the bag recently.

Her chief of staff Saikat Chakrabarti (the brains and the money behind her political operation ever since her 2018 primary victory) divulged in an unintentionally blunt comment in the Washington Post that the Green New Deal was not only not based in the science of climate change, but in fact not even designed with climate change in mind. “[I]t wasn’t originally a climate thing at all,” he is quoted as saying.

In other words, it’s not that they looked for a way to save the world, and just happened to find a way that involved full employment pledges, the retrofitting of millions of buildings, income for those unwilling to work, high-speed passenger rail, and the curtailment of plane travel and carnivorousness. That’s precisely backwards. The Green New Deal came about because Chakrabarti wanted to transform the U.S. economy into something more primitive, and environmentalism struck him as the best excuse for doing so.

The American economy currently is working for everyone who chooses to work. When people work, they are aware of how much money the government takes out of their paychecks. That in itself may present a problem for the Democrats running for election in 2020.