Robert Mueller made a statement at the Department of Justice today. He officially ended his investigation and resigned. However, he did it in a way that was totally in conflict with American jurisprudence.

Townhall reported on Mueller’s statement. Here is one quote:

“I’m speaking out today because our investigation is complete,” Mueller said. “We are formally closing the Special Counsel’s office and I am resigning from the Department of Justice to return private life.”

Fox News reported some other quotes from today:

Mueller, speaking from the Justice Department Wednesday morning, announced the closing of his office and detailed the findings of the Russia investigation, underscoring that there “was not sufficient evidence to charge a conspiracy” with regard to whether members of the Trump campaign coordinated with the Russian government during the 2016 presidential election.

…But Mueller did not mince words on his inquiry into whether the president obstructed justice.

Mueller’s job was to determine if the President committed a crime–if there was no evidence of a crime, then it was not up to Mueller to determine whether or not a crime was committed–his job was to follow the evidence. The President, just like any other citizen, is innocent until proven guilty.

The statement was a farce for a number of reasons.

Mueller would not take questions. President Trump was never given an opportunity to fact his accusers. No one was allowed to cross examine Mueller. Mueller was not going to let the Republicans question him on the basis for the investigation, the role of the Steele Dossier in the FISA warrants, the role of the Clinton campaign in the Steele Dossier, or when during the investigation he realized that there was no there there. It’s interesting that Peter Strzok realized as Mueller was putting his team together that there was no there there (see emails between Peter Strzok and Lisa Page). If Peter Strzok could figure that out, couldn’t Mueller? There will always be a question as to whether or not Mueller prolonged the investigation until after the mid-term elections in order to help the Democrats.

Unfortunately the Democrats seem to have forgotten the concept of innocent until proven guilty. After thirty-plus million dollars, President Trump has not been proven guilty. It’s over. From now on, this is simply harassment of the President and his family. If you support the House of Representatives continuing on this path, understand that in the future the power of government could be turned on anyone who is upsetting the establishment. Is that a country you want to live in? 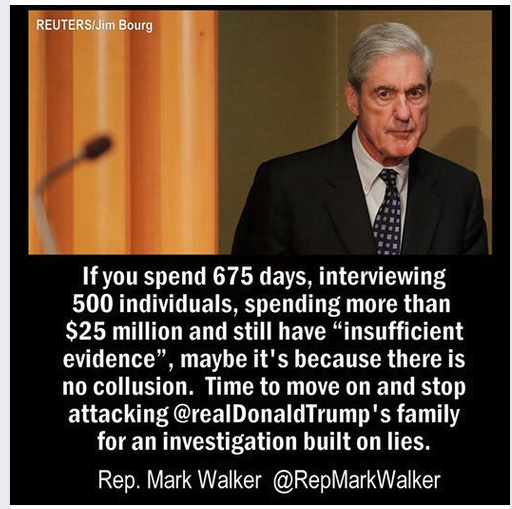