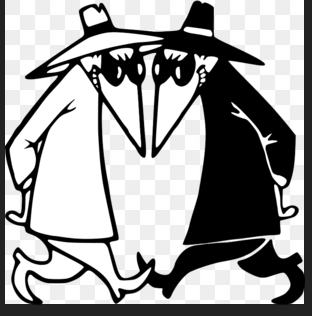 For those of you too young to recognize this image, it is from Mad Magazine in the 1960’s when the magazine featured a cartoon called “Spy Vs. Spy.” This cartoon is very relevant right now because of recent information surrounding the Mueller Report.

One of the chief figures in the Mueller Report is Joseph Mifsud — the mysterious professor from Malta who helped ignite the Russia probe in 2016. Information has now come out that Mifsud was an FBI trainer and an American asset. If people in Congress knew that, why didn’t Robert Mueller and why isn’t it in the Mueller Report?

On Sunday, May 5, The Washington Examiner reported the following:

Mifsud, a London-based professor and former Maltese diplomat, has long been suspected of deep ties to Russian intelligence. He is an elusive figure who has stayed out of the spotlight and is the subject of a letter Nunes, the House Intelligence Committee ranking member, sent to U.S. intelligence agencies and the State Department on Friday seeking relevant documents.

Nunes told Fox News on Sunday there were many questions that arose from special counsel Robert Mueller’s report on Russian interference in the 2016 election, which his letter said “omits any mention of a wide range of contacts Mifsud had with Western political institutions and individuals,” that still need to be answered.

The Gateway Pundit reported on May 5:

Nunes also accused the Mueller team of lying about Joseph Misfud.  Dirty cop Mueller alleged in the report that Joseph Misfud was a Russian operative.  This was a lie.  Misfud worked with Western operatives.  He is suspected of being an FBI trainer and asset.  And…. According to Nunes Mifsud visited the State Department in Washington DC in 2017 — likely AFTER Trump was inaugurated.  This is a MAJOR OMISSION by Robert Mueller, Andrew Weissmann and their band of angry Democrats.

So why is this important? Misfud’s meeting with George Papadopoulos is supposedly what triggered the surveillance of the Trump campaign. If Misfud is an FBI trainer and asset, why was he labeled a Russian asset? This smells like the people in the State Department working to influence the outcome of an election and cripple an elected President. Deep state, anyone? Obviously a very naive George Popadopoulos was set up. As recently reported, the set-up included the stereotypical blonde bombshell. The Russians were not spying on the Trump campaign–the Obama administration was.

One last thought–we have a pretty good idea of the money involved in transferring a large amount of America’s uranium resources to Russia. Don’t you think Russia would rather have Hillary Clinton as President so that the information they have on that deal could be used to keep her under control?