There are a lot of candidates running in the primary election for North Carolina’s Third District in the U.S. House of Representatives. There are candidates running in the Republican, Democrat and Libertarian parties. I will be voting in the Republican Primary for Michael Speciale. I have known Michael Speciale almost since I arrived in North Carolina, and I am impressed with his knowledge of the U.S. Constitution, his devotion to the law, his work ethic, his leadership, and his accessibility to the people he represents. 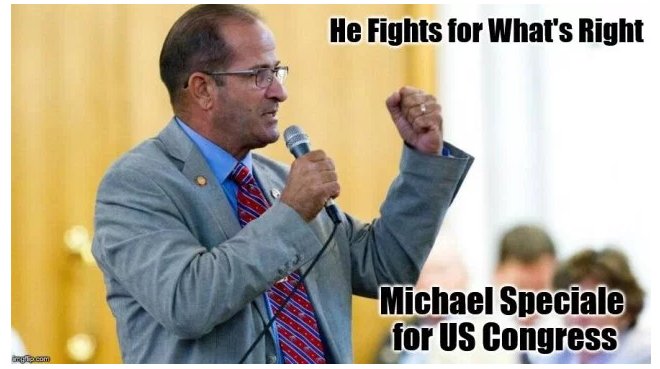 The For Love of God and Country Blog gives a list of Michael’s accomplishments while serving in the North Carolina legislature:

Legislation that NC Rep. Michael Speciale has Sponsored or Co-Sponsored:

HB 22 – Woman’s Right to Know / Ashley’s Law.  (Speciale as Primary sponsor) —  This bill requires that women/girls seeking an abortion are informed about the possibility of reversing that abortion when using the high-dose hormone product, RU486. Hence, the bill is referred to as the “RU486 Reversal Bill.” RU486 is an abortion pill regimen that uses a 2-step process: The woman takes 2 pills – Mifepristone and then misopristone. RU486 can effectively terminate a pregnancy that is less than 10 weeks along (70 days) by sloughing off the uterine wall and the fetus with it. RU486 (mifepristone, a progesterone blocker; progresterone being essential for the uterus to sustain a pregnancy) basically causes the lining of your uterus to shed — so your pregnancy can no longer continue because the egg will have nothing to stay attached to. Then, the misoprostol will cause uterine contractions to allow the uterus to be emptied. According to the bill: The following information must be provided to a woman before a medical abortion: (A). Immediately prior to administering the drug mifepristone, the physician or qualified health professional shall inform the woman that: (i) it is still possible to discontinue a medical abortion by not taking the prescribed misoprostol (the second drug in the abortion protocol) and taking progesterone to reverse the effects of the mifepristone and (ii) information on how, where, and from whom women can obtain assistance in discontinuing a medical abortion is available on the Department of Health and Human Services’ Internet Web site. And (B) Immediately prior to administering the drug misoprostol, the physician or qualified professional shall provide medical proof to the woman that fetal death has occurred.”

HB 28 – Prohibit Abortions After 13 Weeks.  (Speciale as Primary sponsor) — This bill would prohibit abortions after 13 weeks, unless absolutely necessary to protect the life of the mother or for a verified medical emergency. (The current law prohibits abortion after 20 weeks). After 13 weeks, the physician or qualified health professional who recommends an abortion would have to explain that recommendation, as well as present his medical findings, to the state Department of Health and Human Services.

HB 53 (= SB 52) – A Second Chance for LIFE.  (Speciale as co-sponsor) —  HB 53 is the COMPANION BILL – S 52.   HB 53 (and S 52), would require a physician who prescribes an abortion-inducing drug to a pregnant woman to provide the woman with written information about the possibility of reversing the drug-induced abortion through the administration of progesterone. The bills direct the State Department of Health & Human Services to design the written materials including the phone number for the Abortion Pill Reversal Hotline. (Refer also to HB 22).

HB 54 (= SB 51) – Unborn Child Protection from Dismemberment     (Speciale as co-sponsor) —  HB 54 is the COMPANION BILL to S 51.   HB54 would make it illegal for a physician to perform a “dismemberment abortion” in North Carolina. The bills define this gruesome procedure in the following manner: “With the intent to cause the death of an unborn child, to dismember a living unborn child and extract that child in pieces from the uterus through use of clamps, grasping forceps, tongs, scissors, or similar instruments that, through the convergence of two rigid levers, slice, crush, or grasp, or a combination of these, a portion of the unborn child’s body to cut or rip it off.”

The bills (S 51 and HB 54) make it unlawful “for any person to willfully perform a dismemberment abortion and thereby kill an unborn child, or attempt to perform a dismemberment abortion, unless it is necessary to prevent serious health risk to the unborn child’s mother.” The term “health risk” is narrowly defined to include circumstances necessary to avert the death of the mother or “serious risk of substantial and irreversible physical impairment of a major bodily function, not including psychological or emotional conditions.” Both bills would allow the mother or father of the unborn child to seek civil penalties, including monetary damages and attorneys fees, against an individual who performs a dismemberment abortion.

HB 61 – Omnibus Gun Changes (aka, Permittless Conceal Carry).  (Speciale as co-sponsor) —  HB 61 is nearly identical to HB746 (“Permittless Conceal Carry”) which the Republican leadership in the NC Senate failed to move forward last year (2017). HB 61 provides: PART I: Section 14-415.35 of HB 61 makes it lawful to carry a concealed handgun in North Carolina without obtaining a conceal handgun permit (ie, “Permitless Conceal Carry”). All citizens are allowed to carry a concealed firearm without obtaining a permit as long as they meet certain common-sense criteria (to ensure the safety of others).

HB 63 – Protect North Carolina Workers Act.  (Speciale as Primary sponsor) —  HB 63 would (1) increase the number of employers who are required to participate in the federal E-Verify program; (2) would repeal the E-Verify exemption for temporary employees; and (3) would exclude farm workers from the definition of “employee” under Article 2 of Chapter 64 of the General Statutes. HB63 would increase the number of employers required to comply with E-Verify by changing the definition of “employer” as “any person, business entity, or other organization that transacts business in this State and that employs five or more employees in this State.” (Originally, for an employer to be required to participate in E-Verify he/it was required to employ at least 25 employees). Furthermore, the definition of “employer” includes the following exclusions: “The term does not include a farm worker, an independent contractor, or an individual who provides domestic service in a private home that is sporadic, irregular, or intermittent.”

HB 110 (= SB 90) – Protect Religious Meeting Places.  (Speciale as co-sponsor) —  HB 110 would allow concealed carry on the premises when religious meetings are being held.

HB 135 – Government Immigration Compliance.  (Speciale as Primary sponsor) —  HB 135 would do several things, including: (1) Repeal Law Enforcement authority to use prohibited forms of identification (ie, illegals can no longer present a matricula consular identification as an acceptable form of ID); (2) Create additional incentives for local governments to comply with state laws related to immigration; (3) Create a private cause of action to remedy local government non-compliance with state immigration laws; (4) Prohibit the institutions of the UNC university system from becoming sanctuary universities; and (5) Direct the Department of Public Safety to enter into a Memorandum of Agreement with the US Department of Homeland Security.

HB 136 – Concealed Carry Permit Relapse / Revise Law.  (Speciale as Primary sponsor) —  HB 136 would revise the Concealed Carry Law, Sect. 1. G.S. 14-415.16(e) to read: “If the permittee does not apply to renew the permit prior to its expiration date, but does apply to renew the permit within 180 days after the permit expires, the sheriff shall waive the requirement of taking another firearms safety and training course. course so long as the permittee (i) completes a refresher course on the laws governing the use or carry of firearms in this State that is certified or sponsored by at least one of the entities listed in G.S. 14-415.12(a and (ii) submits documentation to the sheriff confirming the permittee completed the refresher course.

HB 160 – Rescind Calls for Constitutional Convention.  (Speciale as Primary sponsor) — House Joint Resolution 160. This Resolution calls for the rescinding of all applications made by the NC General Assembly made during any session to the US Congress to call a Convention pursuant to Article V of the US Constitution for proposing one or more amendments to that Constitution and urging other states to do the same.

HB 172 – K-12 Academic Freedom Act.  (Speciale as Primary sponsor) —  This bill would REQUIRE the State Board of Education to adopt a policy of academic freedom. It would impart a DUTY to the SBOE to adopt a policy that SHALL include, at a minimum, the following elements:

(a) Students and educators are encouraged to respect the ideological, political, religious, or nonreligious viewpoints held by all persons in the classroom.

( b) Students and educators are permitted to engage in open dialogue, critical thinking, and the free exchange of ideas related to the content of the course.

(c) A student shall not be discriminated against or mocked for the student’s ideological, political, religious, or nonreligious viewpoints.

(d) An educator shall not take a student’s ideological, political, religious, or nonreligious viewpoints into account when evaluating the student’s performance.

(e) Educators may answer questions posed by students with openness and honesty.

HB 174 – Home School Tax Credit.  (Speciale as Primary sponsor) —  This bill would provide an income tax credit for those operating a home school.

HB 196 – Parental Consent for Sex Education.  (Speciale as Primary sponsor) —  HB 196 would require a student to have parental consent for any class that educates or attempts to education on reproductive health and safety. Each school year, before students may participate in any portion of (i) a program that pertains to or is intended to impart information or promote discussion or understanding in regard to the prevention of sexually transmitted diseases, including HIV/AIDS, or to the avoidance of out-of-wedlock pregnancy or (ii) a reproductive health and safety education program, whether developed by the State or by the local board of education, the parents and legal guardians of those students shall be given an opportunity to review the objectives and materials as provided in G.S. 115C-81.25(d). Local boards of education shall adopt policies to provide opportunities for parents and legal guardians to consent to their students’ participation in any or all of these programs. A student shall not participate in any program described in this subsection unless the student’s parent or legal guardian has consented to the student’s participation.

HB 216 – School Self-Defense Act.  (Speciale as Primary sponsor) — HB 216 would authorize certain members of a school’s faculty or staff to carry a handgun on the school grounds to respond to acts of violence of imminent threat of violence.

HB314 – Constitutional Amendment – Remove Literacy Test.  (Speciale as Primary sponsor – bipartisan bill) —  HB 314 is a bi-partisan bill that would amend the state constitution by repealing (removing) Section 4 of Article VI which requires a person to pass a literacy test in order to register to vote in North Carolina.

HB328 – Same Reqs/Officials/Early Vote & Election Day.  (Speciale as Primary Sponsor)  —  HB 328 would ensure that requirements for precinct officials (poll workers) will be the same for Early One-Stop Voting as they are on Election Day.

HB 145 – Repeal Constitutional Regulation of Concealed Weapons   [this bill would remove the following language from Article I, Section 3 (“Militia & the Right to Bear Arms”): “nothing herein shall justify the practice of carrying concealed weapons, or prevent the General Assembly from enacting penal statutes against that practice”)

If you want to send someone to Washington who will work to represent you, Michaael Speciale is your man.