America is now energy independent. We now export oil and natural gas. This gives us some degree of leverage against what used to be the monopoly held by OPEC (The Organization of the Petroleum Exporting Countries). Yesterday Townhall posted an article that illustrates the influence America now wields because of its energy independence.

In the midst of the oil price spike scare, President Donald Trump warned the Organization of Petroleum Exporting Countries (OPEC) on Monday to “take it easy” on raising the price of oil. 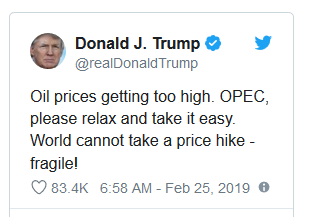 Since this morning, the price of crude oil dropped by more than a dollar per barrel in just an hour. Bloomberg reported today that New York saw a 2.7 percent decrease in oil prices, which is the lowest drop in two weeks.

“Analysts attributed the price rise to improving trade talks between the U.S. and China, unrest in Nigeria and Venezuela, Libya’s refusal to restart production in the El Sharara oil field and continued efforts to curtail supplies by OPEC and Russia,” according to The Daily Caller.

When you don’t have to depend on OPEC for oil to keep your economy going, you have much more power to negotiate oil prices.