The Gateway Pundit posted an article today that included Economist Stephen Moore’s comments on the recent rate hike by the Federal Reserve. Mr. Moore does not pull his punches.

In one of the most remarkable Abbott and Costello routines in modern times, the economic wizards at the Fed again raised interest rates on Tuesday. Their cracker jack logic for doing so is to steer America on a course toward recession so they have the tools in hand to end the recession that THEY themselves created. Can anyone tell us who’s on first?

Worse, this Fed move doubles down on its blunderous interest rate rise in September. President Trump turned out to be exactly right: the central bank pull back on money would slow growth and crush the stock market in order to combat nonexistent inflation.

The Fed had already reduced the monetary thrust that it provides to the economy 8 times since December 15, 2015, by raising its Fed Funds interest rate from 0.25% to 2.25%. Each time, the Fed claimed that it needed to guard our economic airliner from inflationary “overheating” – as if its job is to prevent too many people from working and making sure that pay checks aren’t rising too quickly.

Unfortunately, if you cut engine power too far on a jetliner, it will stall and drop out of the sky.

On Wednesday, December 19, despite the numerous market-based alarms that were sounding in the cockpit, Chairman Powell and his co-pilots on the FOMC voted to raise the Fed Funds rate to 2.50%. This sucks more dollars out of the economy at a time when the world demanding more dollars – thanks to Trump’s Tax cutting and deregulation policies.

Chairman Powell has been entirely tone deaf to the financial markets he seeks to protect. The Dow Jones Industrial average, which had risen by 382 points on hopes that the Fed would listen to President Trump and stop cutting power, plunged by 895 points after the 2:00 PM announcement, and closed the day down 352 points (1.49%). Poof, trillions of dollars of wealth vanished.

Since its peak on October 3, which, not coincidentally, was right after Chairman Powell gave a speech suggesting that the Fed might be through tightening money, the Dow has fallen by more than 3,500 points [now 4,500]. Market fears about his bad judgment have cut the value of all U.S. stocks by about $4.5 trillion, which is enough to buy 16,000 Boeing 787 Dreamliners.

The Fed economists use twisted logic that the economy is “strong enough” to absorb the rate hikes – which is simply an admission that their policy will slow growth.

And for what purpose?   Since the last rate hike the economy has slipped into an anti-growth deflationary cycle with commodity prices – oil, copper, cotton, lead, steel, silver among others – falling by about 10 percent. The new Fed policy is sure to accelerate the deflation and farmers, ranchers, coal miners, oil and gas drillers will get further crunched by the dollar shortage.

Can someone at the Fed Temple please explain how falling commodity prices indicates inflation? Inflation is too many dollars chasing too few goods.

The commodities index is about the only read-out that a monetary pilot truly needs. And, right now, the CRB Index is blaring “Pull up!  Pull up!”

Mr. Powell warned of a slowing economy in 2019 – but he failed to acknowledge that the headwinds the economy is facing are the drag the Fed is itself creating. It was almost as if the Fed believes there is some weird Puritan-like virtue to slowing down the investment, employment and wage-growth spurt Trump policies have created.

What is to be done now? Trump wants to fire the Fed chairman though it is doubtful he has the authority to do that. Much better for Mr. Powell to do the honorable thing and admit that his policies have had disastrous economic and financial consequences and resign.

If not this, at least Mr. Powell should hold an emergency meeting of the Federal Reserve Board and immediately cancel the rate hikes. Better yet, the Fed should announce ways to inject money into the dollar-starved economy.

For much of the past two decades, America’s economic problems of slow growth and flat wages were due to the drag of fiscal and regulatory mistakes. Now at the very moment in time when we FINALLY have a president who is slashing tax rates and regulations and is making America a much more business-friendly nation, the Fed’s monetary policy has come unhinged.

Cockpit warnings have been sounding for months, not only from the markets, but from President Trump and many other growth economists – including ourselves. We are now suffering the financial ramifications of this “pilot error” on the part of Chairman Powell. 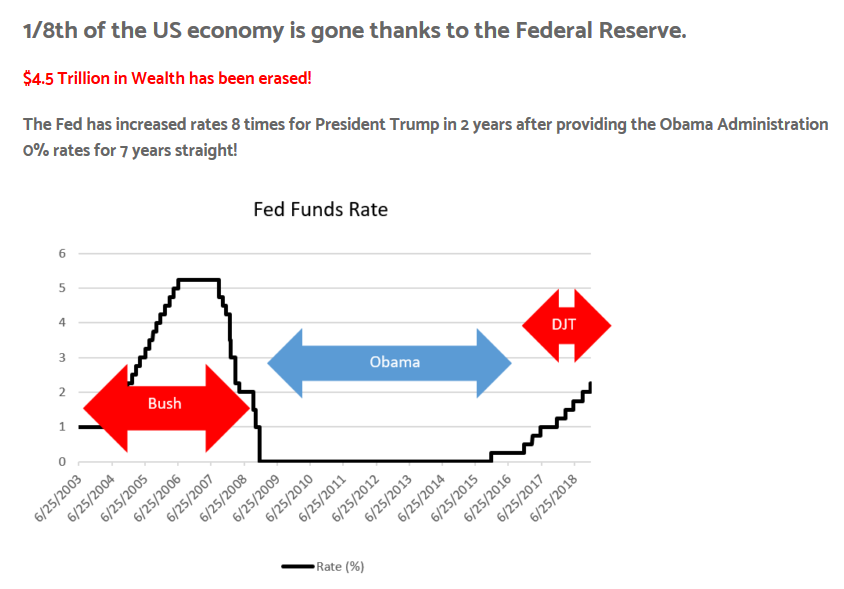 It’s time either to get rid of the Federal Reserve or put someone in charge without a political agenda. Crashing the economy is the only way the Democrats can take the presidency in 2020, and political insiders know that. The recent drastic rate increase are not done without purpose.