In January of 2018, The Washington Times noted that the estimated $18 billion over the next decade spent on a border wall between the United States and Mexico would be roughly 0.0338 percent of the $53.128 trillion the Congressional Budget Office currently estimates the federal government will spend over that same 10-year period. So what is all the fuss about?

Yesterday WWF came to the Oval Office in the White House when Representative Nancy Pelosi and Senator Chuck Schumer discussed the border wall with President Trump. YouTube posted the video:

The battle is not about money–it’s about votes. The Democrats have lost some of the voting blocs they have counted on to win elections–they can no longer be sure of the working man’s vote or the union vote. So how are they going to win elections? They are counting on the minority vote. The Democrats are afraid that if the wall is built, they will lose the Hispanic vote.

According to the Pew Research Center, this is how Hispanics voted in 2018: 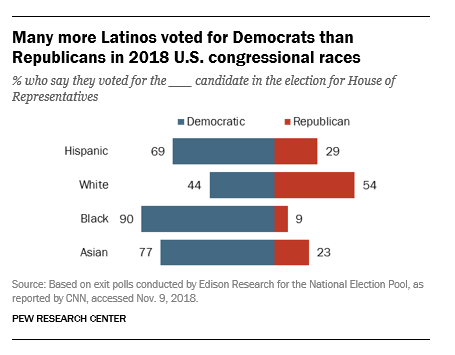 According to a USA Today article posted November 9, 2016, President Trump did surprisingly well among Hispanic voters:

Hispanics favored Democratic candidate Hillary Clinton 65% to 29%, a 36-point difference that helped her secure winning margins in states like Nevada and Colorado and kept her competitive late into the night in other key battleground states.

Because the Democrats are becoming more dependent on the votes of minority groups to win elections, it is easy to understand why they would oppose any legislation or spending that most cost them votes in the minority community.