The following chart is taken from a Power Line article posted yesterday by John Hinderaker: 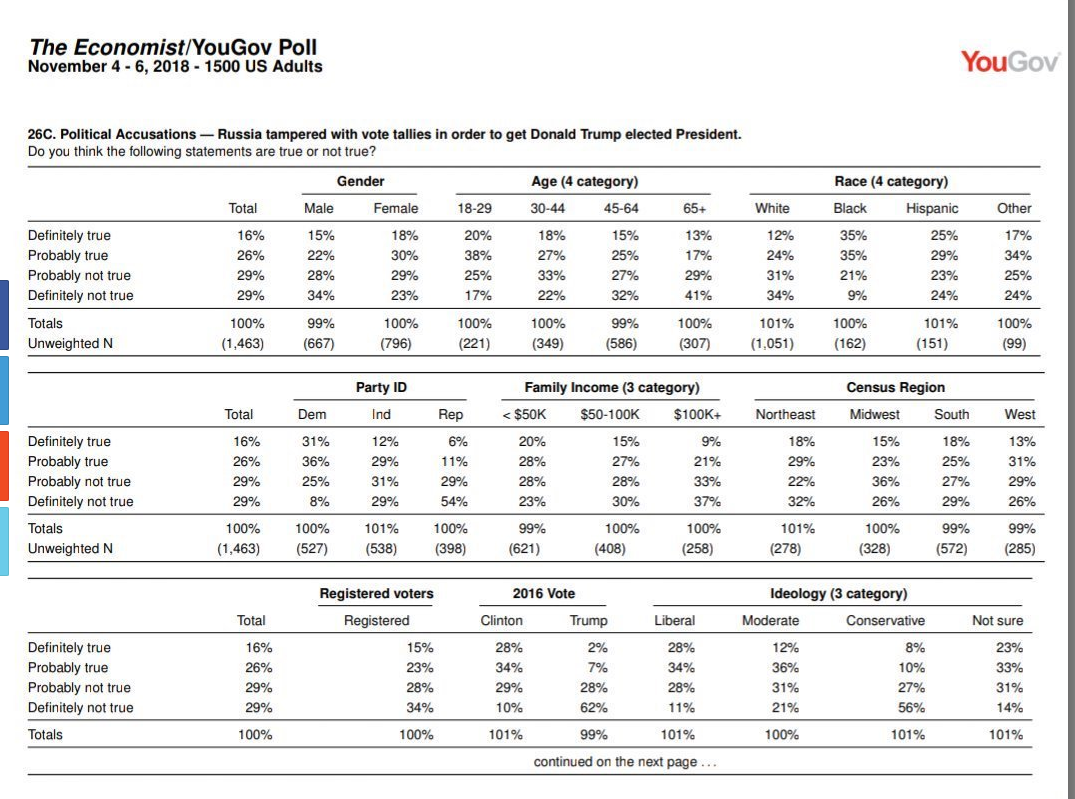 I realize that the print is small, but essentially the chart shows that 42% of all Americans believe that Russia helped defeat Hillary Clinton in 2016. This is true despite the fact that in two years there has been absolutely no evidence to support that claim.

And yet, two-thirds of Democrats say it is either “definitely true” (31%) or “probably true” (36%) that Russia tampered with vote tallies. Women are especially gullible; 48%, across all party lines, have fallen for this fake news. Sadly, 70% of blacks have bought it hook, line and sinker. The Northeast is the country’s most ignorant region, apparently: 47% of Northeasterners have fallen for the hoax.

So the Democrats, by their constant hysteria and innuendo, have convinced a large majority of their followers, and 42% of all Americans, of a palpable falsehood that was fabricated in order to assure Hillary Clinton’s election and then, when that effort failed, perpetuated in an attempt to cripple President Trump’s administration.

Is this the most successful disinformation campaign in history? I don’t know. But in American history, I can’t think of a plausible rival. President Trump is right: fake news is a serious threat. By cynically selling an absurd lie to its followers, the Democratic Party has badly damaged confidence in our democracy.

This is chilling. It means that through a deceptive media campaign Americans can be convinced that any election the media does not like the outcome of can be labeled fraudulent and that many Americans will believe the label. This sort of disinformation campaign is a threat to our republic, but the even bigger threat is voters who believe everything the mainstream media tells them without doing their own research.