The Cato Institute posts a report on freedom in each of the fifty states. The link posted here will send you to the North Carolina report, but you can get to information on any state from that link. I am focusing on North Carolina because it so beautifully illustrates the idea that economic policies matter.

This is the write up on North Carolina:

North Carolina is a rapidly growing southern state with a reasonably good economic freedom profile and an even better record on personal freedom, especially when compared with its neighbors.

North Carolina gradually improved its fiscal policies from 2011 to 2016. State taxes fell from 6.2 percent of adjusted personal income to a projected 5.7 percent, right around the national average. Local taxes have held steady over that period at 3.3 percent of income, seven-tenths of a percentage point below the national average. Debt and government consumption and employment fell, but so did financial assets.

Despite large inmigration, North Carolina has disdained excessive controls on the housing supply. Eminent domain was never effectively reformed. Labor law is good, with no minimum wage, a right-to-work law, and relatively relaxed workers’ compensation rules, but an E-Verify mandate was enacted in 2011. Regulation has killed off the managed care model for non-large-group health insurance. Cable and telecommunications have been liberalized. Occupational freedom is a weak spot, especially for the health professions. A sunrise review requirement for occupational licensing proposals was scrapped in 2011. North Carolina is one of the worst states for insurance freedom. It has a large residual market for personal automobile and homeowner’s insurance because of strict price controls and rate classification prohibitions. It also has a price-gouging law and a minimum-markup law for gasoline. Entry is restricted for medical facilities and moving companies. North Carolina’s civil liability system has improved over time and is now about average.

North Carolina has one of the best criminal justice regimes in the South. Incarceration and victimless crime arrest rates are all below average. There is no state-level civil asset forfeiture, but local law enforcement frequently does an end-run around the law through the Department of Justice’s equitable sharing program. Gun rights are more restricted than in many other southern states, with carry licenses somewhat costly to obtain and hedged with limitations. Plus, buying a pistol requires a permit, there is local dealer licensing, background checks are required for private sales, and most Class III weapons are difficult to obtain (sound suppressors were legalized in 2014). Alcohol freedom is mediocre because of state liquor stores and somewhat high markups and taxes. Marijuana has not been liberalized apart from a 1970s-era decriminalization law. Gambling freedom is quite low. School choice was introduced in 2014, but only for students with disabilities. Tobacco freedom is about average because of reasonable taxes and workplace freedom (but not freedom in bars or restaurants). 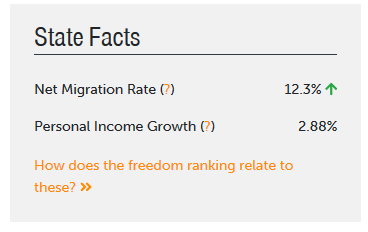 Note that the article says that North Carolina gradually improved its fiscal policies between 2011 and 2016. So what happened in 2011–the Republican party took over the legislature after 140 years of North Carolina being a one-party state (Democrat). The Republicans in the legislature have continued to cut taxes and cut spending. Those economic policies have brought people to the state and improved the economic position of the state. Economic policies matter.