On Friday, Newsweek posted the full text of the Mueller Indictment (here). You can read the whole thing if you choose–it’s thirty-seven pages long. I don’t have that kind of patience, but I did glance at it and found an interesting snippet: 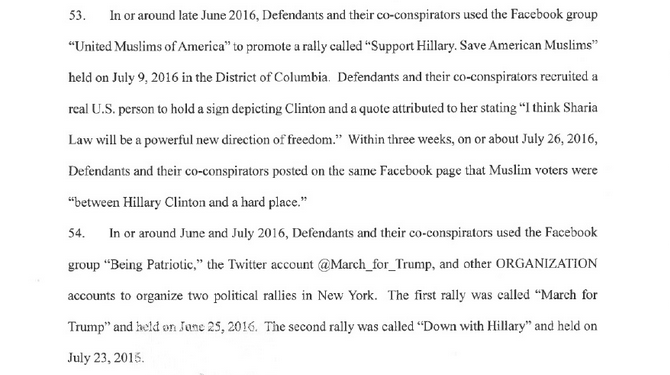 Number 53 show that the Russian meddlers used a Muslim Facebook group to support Hillary Clinton because supposedly she had made a statement in favor of Sharia Law. Later on the same Facebook page, they stated that Muslim voters were “between Hillary Clinton and a hard place.” What does that even mean? They also used Facebook and Twitter to organize political rallies in New York for Trump. I don’t know where it is in the indictment, but it has also been reported that they organized pro-Trump and anti-Trump rallies in New York City on the same day. I suspect that the motive behind that scheduling was the possibility of violence.

The thing that occurs to me here is that the Russians were able to accomplish whatever they accomplished (and it is questionable whether they accomplished anything) because of the unwitting cooperation of Americans. We, as Americans, are the ones who have let our political discourse get out of hand. Many of us have forgotten how to have a civil discussion of issues–instead we resort to name calling or changing the subject. Maybe it is time to require debating classes for everyone over the age of two so that we can bring back civility.

At any rate, I find it interesting that the Russians used a Muslim Facebook page to promote Hillary Clinton.

Also, just for the record, we as Americans have meddled in a few elections ourselves.