The American Thinker posted an article today about CNN’s claim that Thomas the Train and Paw Patrol are ‘fascist cartoons.’ I will admit that I know nothing about Paw Patrol, but I spent many happy hours with my grandchildren watching Thomas the Train. 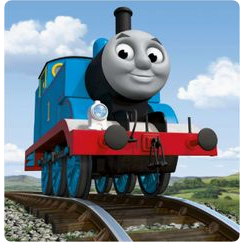 The article relates some of the history of Thomas the Train:

Reverend Wilbert Audrey, creator of Thomas the Train, has recounted how, when his 3-year-old son was ill with the measles, he told him stories about trains. Audrey says that in his own childhood he had to read boring books about perfect children so that he would learn from their moral example. He decided to write interesting books about engines with human characteristics in a fictional island he called Sodor. The trains would push the envelope until they got in trouble, be punished, and after making amends would be “bought back into the family so to speak.” Morality in the world of Thomas was making oneself useful to society, being a good friend, and keeping the railroad functioning smoothly. The human aspect of his trains is part of their appeal to children and the moral aspect of his stories was part of their appeal to the adults who read the stories to their children.

So what is the basis of the objections?

The leftists are particularly offended by the stories of Henry in the Tunnel and Toad Stands By. Henry the Train decides that rather than contribute to society he’d prefer to stay in a tunnel. Despite the best efforts of Sir Topham Hat to get Henry out of the tunnel Henry refuses to budge and Sir Topham Hat teaches him a lesson by locking him into the tunnel with a brick wall. The New Yorker quotes a commenter as saying “What moral lesson are kids supposed to learn from this? Do as you’re told or you will be entombed forever in the darkness to die?” In the next episode Henry, miserable in the tunnel, becomes willing to help again and is released. The New Yorker critic doesn’t mention that. In Toad Stands By bullying trains, otherwise known as the troublesome trucks, are taught a lesson by Oscar the locomotive, whom they had picked on. Oscar pulls the bullying trains behind him when they decide to cause trouble and not move. Oscar fights back by pulling very hard and the leader of the bullies, Scruffey, who is behind him bursts in half. The New Yorker quotes a commenter as writing: “I guess the lesson is that if someone is bullying you, kill them?” In the next story Scruffey is repaired and the troublesome trucks learn never to cause trouble for Oscar again. You are not told that by the author of The New Yorker article.

It seems as if the political left has declared war on the basic values that form the foundation of western civilization. I guess the concept of repentance and improved behavior is a concept they have somehow overlooked.