Investor’s Business Daily posted an article yesterday about the Paris Climate Accord. It seems as if President Trump did the right thing by pulling America out of the agreement.

There is still no agreement among scientists as to the role that man and his civilization play in climate change. Obviously the climate has been changing continually since man has inhabited the earth. There is a documented period of global warming during the Middle Ages, and there is no way that carbon emissions could be responsible for that. There are also plant fossils found beneath the ice in Greenland, another indication that the climate has changed over time. We all remember the TIME Magazine cover during the 1970’s warning of the coming ice age. We also know that our local weatherman is not accurate 100 percent of the time.

According to the latest annual UN report on the “emissions gap,” the Paris agreement will provide only a third of the cuts in greenhouse gas that environmentalists claim is needed to prevent catastrophic warming. If every country involved in those accords abides by their pledges between now and 2030 — which is a dubious proposition — temperatures will still rise by 3 degrees C by 2100. The goal of the Paris agreement was to keep the global temperature increase to under 2 degrees.

Eric Solheim, head of the U.N. Environment Program, which produces the annual report, said this week that “One year after the Paris Agreement entered into force, we still find ourselves in a situation where we are not doing nearly enough to save hundreds of millions of people from a miserable future. Governments, the private sector and civil society must bridge this catastrophic climate gap.”

The report says unless global greenhouse gas emissions peak before 2020, the CO2 levels will be way above the goal set for 2030, which, it goes on, will make it “extremely unlikely that the goal of holding global warming to well below 2 degrees C can still be reached.”

What the report does make clear, however, is that all the posturing by government leaders in Paris was just that. Posturing. None of these countries intended to take the drastic and economically catastrophic steps environmentalist claim are needed to prevent a climate change doomsday. As such, Trump was right to stop pretending.

Whether you believe in climate change or not, the Paris climate accord amounted to nothing, or pretty close to it. Even the UN admits that now.

We need to look at the balance between civilization of the environment. America is one of the economic leaders in the world and yet one of the least polluting. Look at the progress we have made in recent years–many of our formerly polluted rivers are being cleaned up, the industries that created the ‘super fund sites’ are now controlled to the degree that they can no longer ruin the environment, waste disposal has improved, and carbon emissions for cars and factories have decreased.

The following chart is from the Energy Information website: 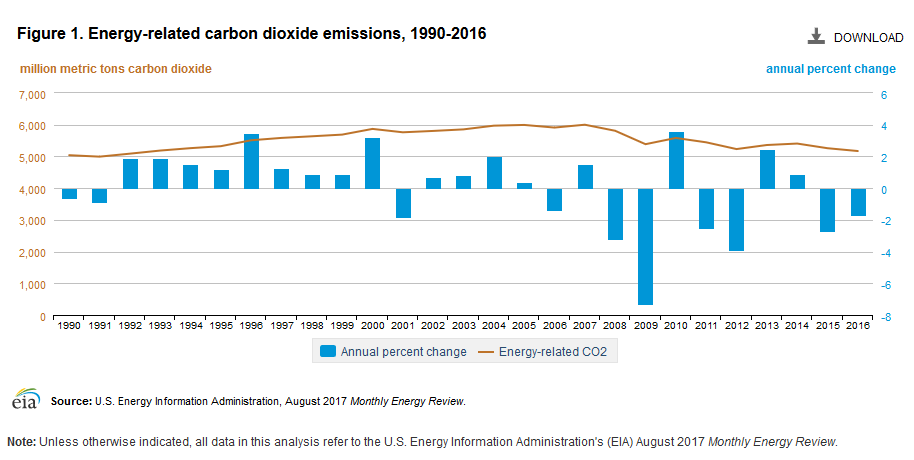 We are making progress. The Paris Agreement would not have positively impacted that progress–it would only have crippled the American economy.