The decision of the Ninth Circuit Court of Appeals did not uphold the law. This is the law as it is written: 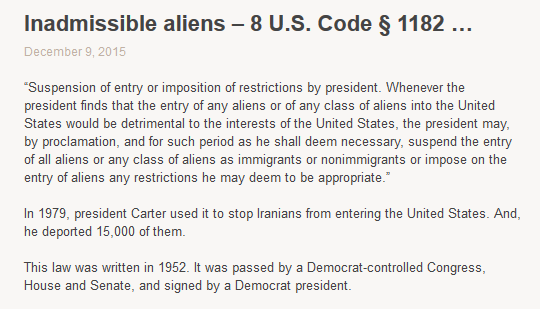 However, there is more to the story. On Thursday, The Washington Times reported the following:

The State Department has more than doubled the rate of refugees from Iraq, Syria and other suspect countries in the week since a federal judge’s reprieve, in what analysts said appears to be a push to admit as many people as possible before another court puts the program back on ice.

A staggering 77 percent of the 1,100 refugees let in since Judge James L. Robart’s Feb. 3 order have been from the seven suspect countries. Nearly a third are from Syria alone — a country that President Trump has ordered be banned altogether from the refugee program. Another 21 percent are from Iraq. By contrast, in the two weeks before Judge Robart’s order, just 9 percent of refugees were from Syria and 6 percent were from Iraq.

“There’s no doubt in my mind they would be doing whatever they could to get people in before something changes because, from their perspective, their motivation is to resettle these folks. It would not be the first time that State Department officials have prioritized facilitating someone’s entry to the United States over security concerns,” said Jessica Vaughan, policy studies director at the Center for Immigration Studies.

This is an example of the need to fire the majority of employees left over from the previous administration.

There are some things we need to remember in this discussion. Vetting of refugees from these countries is very difficult–in some cases we are dealing with failed states that cannot check records, and in other cases we are dealing with states that promote terrorism. ISIS has already stated that it is including terrorists with the refugees. Do we need to import terrorists? We also need to remember who ISIS is–they are the Sunni Baathists who were in charge of Iraq under Saddam Hussein. They were ruthless in ruling Iraq, and they are ruthless as ISIS. We really do not want to allow them into America.

What we are seeing is the Washington establishment trying to destroy an outsider who is a threat to their power. We need to understand that as we view the events around us. The Ninth Circuit and (unfortunately) the State Department are not concerned with the safety or security of Americans–they are concerned only with their political views and their power. Our Founding Fathers would be appalled.