On November 10, The Washington Post posted an article about the impact of the Obama Administration on the Democratic Party.

This is a graph from that article: 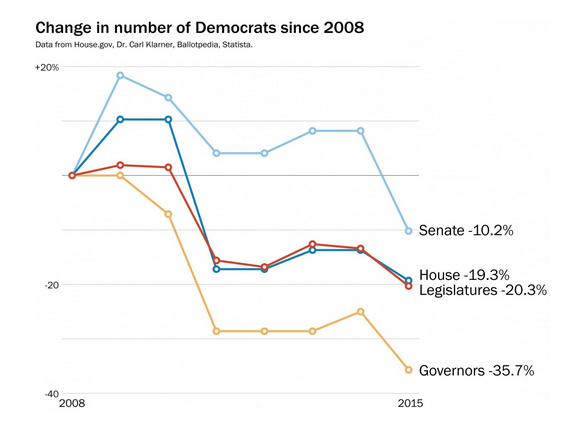 We tend to focus on the loss of the presidency as the example of Democratic failure. That’s blinkered. Since 2008, by our estimates, the party has shed 870 legislators and leaders at the state and federal levels — and that estimate may be on the low side. As Donald Trump might put it, that’s decimation times 50.

So what happened? The Democrats lost the Presidential race this year for many reasons. Hillary Clinton was a seriously flawed candidate. It became obvious that the Democratic primary was rigged to make sure she won. That was the first mistake. The history of scandal that follows the Clinton family was also a problem. I suspect that had Jim Webb been the candidate, the Democrats would have won the Presidency, but he was far too conservative for today’s Democratic party bosses. The Democratic Party has moved to the left. People like John Kennedy would be out of step with the current Democratic Party. The move left became obvious in 1992 when Pennsylvania Governor Bob Casey was denied a speaking slot at the Democratic Convention because he wanted to represent the pro-life minority. The leftward progress has accelerated since then.

America is a Representative Republic–not a Democracy. President Obama’s Administration has not brought America prosperity, peace, or security. Most Americans are not as well off as they were when President Obama took office. It has become very obvious that many of the lofty Democratic Party ideas do not work. ObamaCare is a prime example. It is time to go back to common sense–lower taxes, less government, encouraging a work ethic and the free market. These are principles that are totally alien to most of the Democratic party. Actually, they are alien to many Americans. However, Americans know when they are safe and prosperous and when they are not. I believe that is why the Democratic Party, at least temporarily, has collapsed in the past eight years.