As a conservative, I believe that people occasionally need help to access the American dream, but I don’t believe that the American dream should include two or three generations of collecting benefits from the government. We handled poverty much better when it was a local issue done by local charitable organizations.

The chart below is from the U.S. Census Bureau: 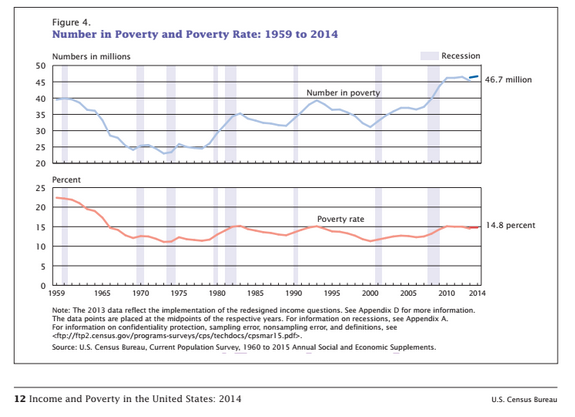 In creating “The War on Poverty,” we have created a huge bureaucracy that has no incentive to actually decrease poverty. As you can see from the above chart, we have not made significant progress in ending poverty. Instead, we have created a vehicle for those who choose not to develop the discipline of going to work every day to live quite comfortably while the rest of us earn the money to support them. This is not a workable long-term arrangement.

Meanwhile, the Mayor of Albuquerque has a much better idea. On Thursday, The Washington Post told his story.

Next month will be the first anniversary of Albuquerque’s There’s a Better Way program, which hires panhandlers for day jobs beautifying the city. In partnership with a local nonprofit that serves the homeless population, a van is dispatched around the city to pick up panhandlers who are interested in working. The job pays $9 an hour, which is above minimum wage, and provides a lunch. At the end of the shift, the participants are offered overnight shelter as needed.

The article cites a few examples of the how the program has made a significant difference:

The There’s a Better Way van employs about 10 workers a day but could easily take more. When the van fills, people have begged to get a spot next time, she said. That’s why the city has increased funding for the program to expand it from two to four days a week. And it inspired St. Martin’s to start its own day labor program, connecting the jobless to employers in the area who could offer side jobs.

Tillerson (Kellie Tillerson, director of Employment Services at St. Martin’s Hospitality Center, the organization that facilitates the city’s program) said a lot of the people who get picked up by the van were not aware of all the services available to them. One man who recently got out of prison returned to St. Martin’s the day after taking one of the city’s jobs. She said it enrolled him in the day-labor program, told him about behavioral health services and are helping him get an ID.

…The program hasn’t weeded out all panhandling in the city, and supporters say that’s not really the point. It’s connecting people who would otherwise not seek help to needed services. And it’s showing them when they are at their lowest that they have real value, and that others are willing to show them kindness to help them have a better life.

“It’s helping hundreds of people,” Berry (Republican Mayor Richard Berry) said, “and our city is more beautiful than ever.”

This program makes a lot of sense.