Unfortunately voter fraud is a problem in America. There have been instances of voting machines incorrectly registering votes, and there are examples of people voting multiple times under various names. Voter ID laws are an attempt to solve at least part of the problem.

A few days ago I posted the following chart. I am reposting it just as a reminder of where we are: 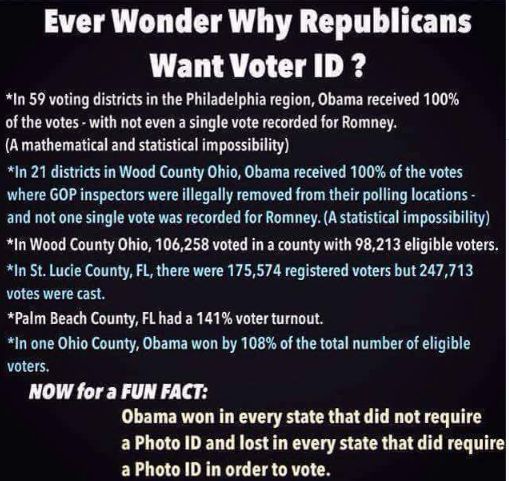 Several states have passed voter identification laws, and lawsuits have followed. Texas, at least, is sticking to its guns.

An agreement between the State of Texas and groups that attempted to strike down the state’s photo voter identification law came to an agreement Wednesday that will keep the election integrity policy largely in place for the November elections and thereafter.

Under the deal, voters with valid forms of photo ID or ones “expired by no more than four years” will be allowed to vote a regular ballot, according to court documents obtained by Breitbart Texas. In trade, individuals presenting a valid “voter registration certificate, certified birth certificate, a current utility bill, a bank statement, a government check, a paycheck, or any other government document that displays the voter’s name and an address and complete and sign a reasonable impediment declaration shall be permitted” to vote a regular ballot as well.

As I reported in September 2010, an organization called True the Vote investigated voter fraud in Houston, Texas. This is what they found:

“Their work paid off. Two weeks ago the Harris County voter registrar took their work and the findings of his own investigation and handed them over to both the Texas secretary of state’s office and the Harris County district attorney.

“Most of the findings focused on a group called Houston Votes, a voter registration group headed by Sean Caddle, who formerly worked for the Service Employees International Union. Among the findings were that only 1,793 of the 25,000 registrations the group submitted appeared to be valid. The other registrations included one of a woman who registered six times in the same day; registrations of non-citizens; so many applications from one Houston Voters collector in one day that it was deemed to be beyond human capability; and 1,597 registrations that named the same person multiple times, often with different signatures.”

North Carolina is currently involved in a lawsuit against its voter identification laws–despite the fact that voter turnout was up when the laws went into effect in March. Hopefully, North Carolina can find a way to follow the example of Texas.