Yahoo News is reporting today that Salah Abdeslam, the last surviving member of the team that carried out the terrorist attack on Paris, has been captured.

The article includes a timeline of Salah Abdeslam’s life: 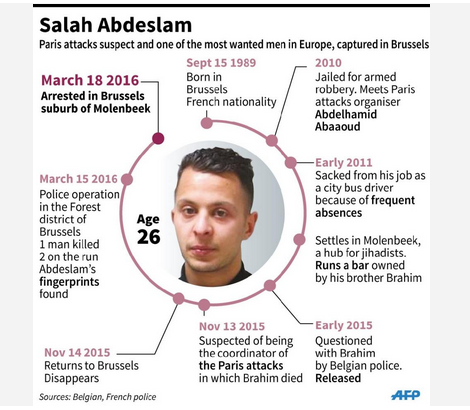 This man was born in Brussels. He was considered a French national. The article reports that he had evidently planned to blow himself up with a suicide vest, but changed his mind at the last moment. A suicide vest was found in Paris after the attack in an area Abdeslam’s cell phone indicated that he had been in.

The ringleader of the attacks, IS member Abdelhamid Abaaoud, was also from Brussels. He was killed in a raid in Paris in November.

Another of the Paris attackers, Bilal Hadfi, was last week buried quietly in the same cemetery as Abdeslam’s brother.

Both had links to Molenbeek, a largely immigrant district which has been a hotbed of Islamist violence for decades.

Abdeslam and his brother had run a bar in the area until it was shut down by the authorities a few weeks before the Paris attacks.

It is frightening to think that ISIS is successfully recruiting western-born terrorists for suicide attacks in Western countries. This man would have easily been able to come to America on a French visa. That thought is troubling.