Yesterday John Hinderaker at Power Line posted an article about the lies being told by scientists pushing the Global Warming agenda. I am not a scientific type, so I don’t understand exactly how this works, but even in my nonscientific state, I can understand that inventing numbers in reporting temperatures will change the results. The source of the article at Power Line is an article at wattsupwiththat.com, probably the best climate site on the internet.

This article at Watts Up With That? adds incrementally to that picture. John Goetz analyzes the U.S. temperature data that finds its way into “official” tabulations. This is particularly important because, while the U.S. represents only 6.6% of the total land area of Earth, we account for close to half of the data relied on by the Global Historical Climatology Network. This is a big topic, and you should study the Goetz article in its entirety if you have time. I am still digesting it.

But a few highlights are obvious. First, Goetz finds that approximately 92% (or even more, depending on how you calculate it) of US surface temperature data consists of estimated or altered values. Very little raw data finds its way into the warmists’ climate models–which, of course, is the way they want it. Second, the adjustments that are made to the U.S. data consistently skew the numbers as we have described many times before–they try to make the present look warmer, compared with the past.

It’s all about the money.

Why do the alarmists, lavishly funded by the world’s governments, persistently alter the data before they feed it into their computer programs? Because the raw data won’t get them where they are trying to go, to keep the money flowing. This is what you see if you just plot the temperatures that were recorded on thermometers here in the U.S. No warming: 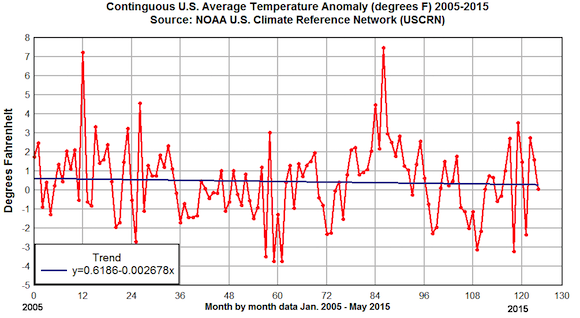 It’s bad enough that politicians routinely lie to the public, but it really bothers me when scientists do it.