On Sunday, Stephen Moore posted and article at the Washington Times about President Obama’s war on coal. Oddly enough, it’s not really about coal. Somehow in recent years, the environmental movement has been taken over by an extreme element more closely related to communism than environmentalism. These are the people who want total government control of even the puddles that form on your lawn in the Spring.

The article at the Washington Times noted some very interesting facts about the war on coal:

In fact, almost all of the states that are politically liberal and vote unfailingly Democratic are low coal use states. Washington, New York, New Jersey and Connecticut are also in the top 10 states least reliant on coal. Only conservative Idaho is a red state with low coal consumption.

Here is the information in chart form: 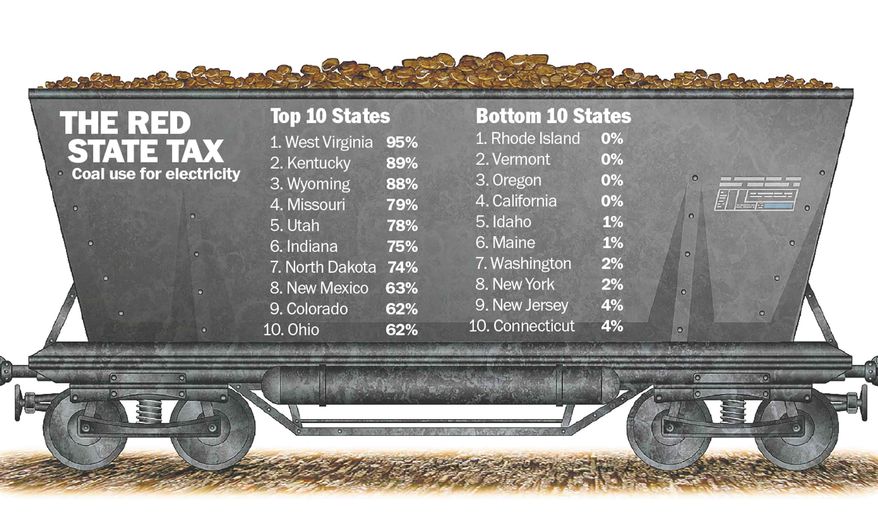 So what is the war on coal about?

But the pain from the new EPA rules won’t be evenly distributed across America. Far from it. The coal producing states like West Virginia and Wyoming will see massive job losses and increases in electric utility costs. The nationwide costs will be about $100 billion a year eventually or a reduction in GDP by about one-half percentage point, the Heritage Foundation finds. But for heavily impacted states — Republican areas in the Midwest, South and mountain states — the costs will reach about $1,200 a year to average families. Mr. Obama’s policies that have had such a crushing effect on middle-income family finances are about to get a whole lot worse.

The liberal coastal states will feel only modest effects because they don’t use much coal.

Would Barbara Boxer of California and Sheldon Whitehouse from Rhode Island, two of the biggest cheerleaders for the new regulations, be so euphoric if their voters were paying these massive costs for their green agenda? But the east and west coast green snobs can live with raising costs and unemployment in “fly over country.”

It’s time to label the Obama green policies what they truly are: steep taxes on red state America. By the way, many purple states like Pennsylvania, Ohio and Virginia also get hammered by Mr. Obama’s climate change agenda.

I did the rough calculations. For every reduction in BTUs burned from coal in the United States, China and India alone will burn 10 to 12 more BTUs. Even if the United States cut coal use to zero over the next 20 years, global emissions from coal will rise sharply. So the Obama plan is all pain no gain. It would be like trying to reduce unwanted pregnancies in the Third World by having Americans use more birth control. Stupid.

But back to the Obama assault on red and purple states. Let’s hope the voters get the message that Mr. Obama’s green energy policies are directed at their jobs and their paychecks. Most people in blue states and the workers around the rest of the world won’t feel a thing. This is fair?

It’s time to get back to a time when Congress passed the laws and our elected officials took responsibility for the laws they passed.