Received in my email from a friend:

Below is a brief summary chart of what the Obama regime has really done to our great nation.

2.    Our population rose 17 million, but the number of taxpayers only went up 9 million, the workforce rose only 4 million,  13 million desperate people stopped looking for work and dropped OUT of the workforce because jobs don’t exist (millions applying for and getting designated as ”disabled” so they don’t starve) and actual unemployment rose 4 million.

3.    The “food stamp” president, Obama,  has seen recipients rise 16 million (almost as much as the 17 million population increase!) to 46 million. Those living in poverty rose 16% to 44 million and US manufacturing jobs dropped from 19 to 12 million since 2000.  Why?  Because our highest-in-the-developed-world corporate tax rate of 35% is driving jobs out of our country as fast as corporations can legally incorporate off shore to maximize profits and survive. 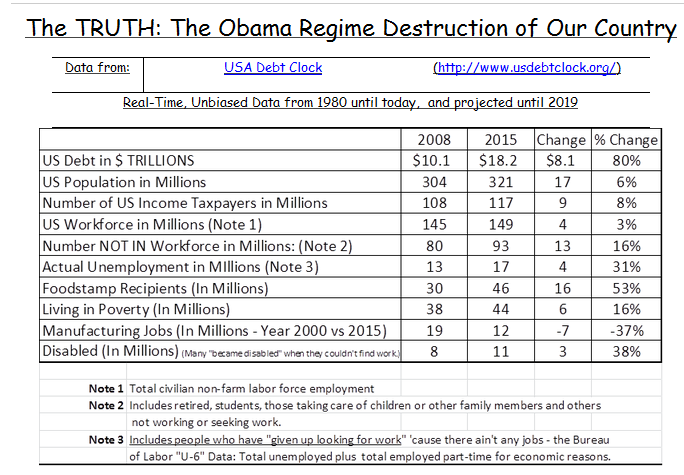 This, my friends, is where we are.