This was posted on Facebook by a friend. She states that an eastern North Carolina middle school was recently given an assignment through the Jr Scholastic Magazine. 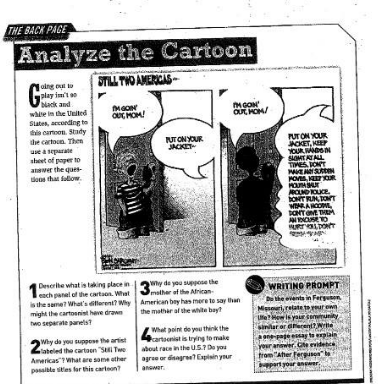 I am sure that this cartoon and the accompanying questions were in response to the death of Michael Brown. I would like to point out that even though it is very unfortunate that Michael Brown is dead, he would still be alive had he not attacked a police officer and tried to steal his gun. It would be more instructive to teach all of the children in the school to respect the police and listen when the police speak to them. If Michael Brown had been white and attacked a police officer, I suspect he would still be dead. If Michael Brown had not been killed, I suspect the police officer would be dead. There is no way that story has a happy ending, and it is a shame that Junior Scholastic magazine chose to teach racism rather than teach respect for the law.