On Saturday, Haaretz reported that a Palestinian-American was killed on Friday in the West Bank as he attempted to throw a firebomb.

According to the military, the boy, 14, was about to throw a firebomb towards Route 60; an IDF unit positioned nearby opened fire after he had lit the firebomb’s fuse, and was preparing to hurl it. Palestinian officials denied these claims.

A relative identified the teen as Orwa Abd al-Wahhab Hammad and said he was born in New Orleans and came to the West Bank at age six. Hammad’s cousin Moath said he was among a group of Palestinians who were throwing rocks at Israeli soldiers.

An Israeli army spokesman told Reuters Israeli forces “managed to prevent an attack when they encountered a Palestinian man hurling a molotov cocktail at them on the main road next to Silwad. They opened fire and they confirmed a hit.”

This is the U. S. State Department response:

The United States expresses its deepest condolences to the family of a U.S. citizen minor who was killed by the Israeli Defense Forces during clashes in Silwad on October 24.  Officials from the U.S. Consulate General in Jerusalem are in contact with the family and are providing all appropriate consular assistance. We call for a speedy and transparent investigation, and will remain closely engaged with the local authorities, who have the lead on this investigation.  We continue to urge all parties to help restore calm and avoid escalating tensions in the wake of the tragic recent incidents in Jerusalem and the West Bank.

How about telling the Palestinians not to train their children to throw rocks and firebombs at soldiers? This was not a ‘tragic recent incident.’ It is the result of years of indoctrination of hatred toward Israel in the Palestinian educations system.

Below is a picture of some kindergarten children at the graduation in Palestine that I posted in June 2012. Until this sort of training in school stops, there will not be peace between Israel and its so-called Palestinian neighbors. 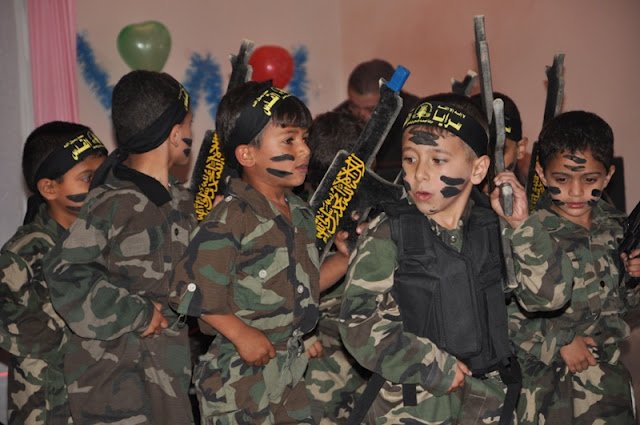 As usual, the State Department is on the wrong side of this conflict.