As a major snowstorm bears down on the northeastern United States and a bunch of scientists and tourists are stuck in unusually thick ice in Antarctica, the U.K. Telegraph proclaims that the earth is warming faster than ever.

The rebuttal can be found at wattsupwiththat in an article entitled, “IPCC silently slashes its global warming predictions in the ARS final draft.” The Intergovernmental Panel on Climate Change (IPCC) has released its Assessment Reports on Science (ARS).

The article at wattsupwiththat reports:

A graph in the article explains the problem with the old model on global warming: 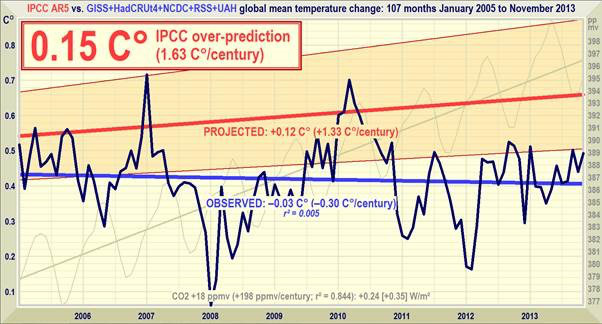 Unfortunately, global warming science has become more about obtaining funds for studies and about redistribution of wealth. I think when we finally look at global warming objectively (if we ever do), we will be amazed at how easily we were deceived.