The chart below was posted at zerohedge.com on Thursday: 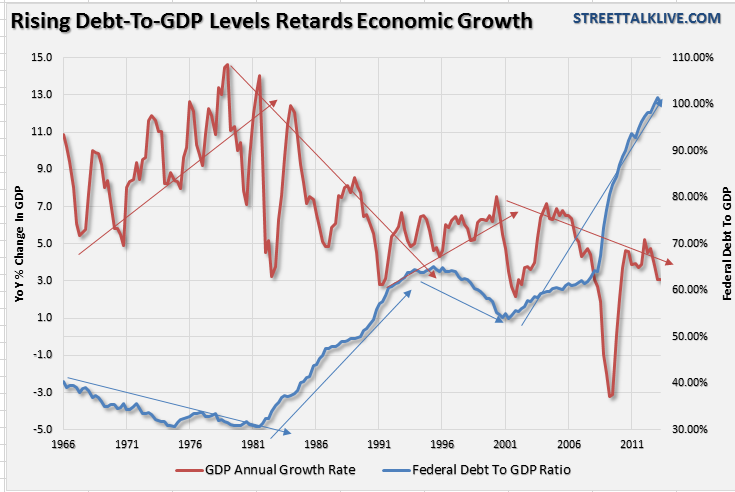 The article cites what it considers the most disturbing sentence uttered during the debt ceiling debate/government shut down, that should raise some concerns by both political parties:

“We must increase our debt limit so that we can pay our bills.”

When you think about it, that is an amazing statement.

John Hinderaker at Power Line made the following observation yesterday:

The declining deficit is due to the election of a Republican House in 2010, which led to the sequester, and to tax increases. But in historical perspective, a $650 billion deficit is nothing to celebrate: the U.S. has never run a deficit anywhere near that big in any fiscal year when Barack Obama was not president. Don’t be fooled by Democrats who try to attribute FY 2009 to George Bush. The Democratic Congress didn’t pass spending bills covering the vast majority of FY 2009 spending until Obama was safely in office, and FY 2009 includes the Obama/Pelosi/Reid “stimulus” spending, with which George Bush, obviously, had nothing to do. The largest deficit of the George W. Bush years was $459 billion, in FY 2008, the year when financial markets collapsed. The largest deficit of the Clinton years was $255 billion; of the George H.W. Bush years, $290 billion; and of the Reagan administration, $221 billion.

As Americans, we need to be concerned about the deficit. Until we get the deficit under control, it acts as a ticking time bomb that will eventually destroy the American economy. We need to elect people who will bring spending under control. If we do not do that, then we are responsible for our own demise.