Yesterday The Conservative Treehouse posted an article about some interesting information within the Senate Select Intelligence Committee (SSCI) Russia Report Volume-5 that a Twitter user discovered. The tweet explains how some of the major players in the RussiaGate scandal were able to avoid questioning.

This is a screenshot of the pertinent part of the Report: 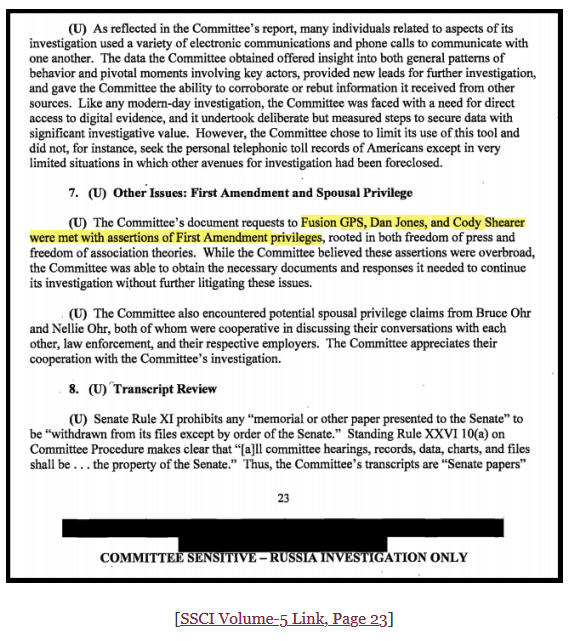 Dan Jones left the SSCI prior to the 2016 election and went to work pushing the Trump-Russia narrative through his media contacts.  Jones took over funding Fusion-GPS and Chris Steele in 2017 at the same time Senator Mark Warner took over as SSCI vice-chairman. Dan Jones and Mark Warner coordinated the efforts outside and inside government on the same objective.  The Senate Intel Committee was part of the effort.

As a result of their alignment and common purpose the SSCI didn’t investigate the origin of the Trump-Russia narrative; and instead positioned themselves as a shield to block any investigative inquiry into what took place.  THIS IS A BIG DEAL !

The attempt to remove President Trump from office encompassed all three branches of the U.S. government.

How does the office of the United States president; and more importantly a constitutional republic itself; survive a coordinated coup effort that involves all three branches of government; while simultaneously those in charge of exposing the corruption fear the scale of the effort is too damaging for the U.S. government to reveal?

Senator Dianne Feinstein was vice-chair of the SSCI in 2016.  Feinstein’s former chief of staff was Dan Jones.

The post-election plan to protect the intel community would involve using the SSCI institution to cover for prior Obama-era operations. Senator Feinstein was not a good fit for that role, so Feinstein abdicated her position in advance of the next congress in 2017.

In January 2017 Senator Mark Warner took over as SSCI vice-chair after Dan Jones left the SSCI to continue efforts as a freelance operative.   Warner was put into place to carry out the strategic objectives needed to protect the DOJ, NSD, CIA, FBI and ODNI operations against Donald Trump who was now the incoming president-elect.

Keep in mind with control of the SSCI the group inside the legislative branch could control who ran what intelligence agency because they held the power of confirmation; and they could control who would rise to be inspector general within the intelligence community, a position needed if a whistle-blower was to surface.  The SSCI would only allow Michael Atkinson to act as ICIG – That’s because Atkinson was part of the 2015/2016 crew.

Please follow the link above to read the rest of the article. It is chilling that there was a coup going on for years and no one has yet been held accountable for it.